I thought I better post a game. Apologies about the 'game picture' stop measure (using Drago), I have not set up an SGF viewer. 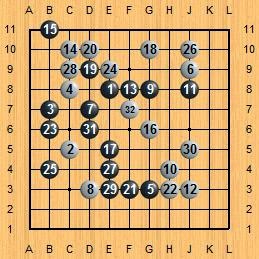 The game ended abruptly with some kind of exception that I need to think about! Black was probably contemptuous of white's last move.

Obviously lots of thought and testing needs to go into what random playouts should be done and how they should be parsed. Mostly I picked small numbers because it's just my Lenovo ideapad hammering away at it.

My code is in need of ruthless refactoring, which I am quite looking forward to.

The bot has since been renamed ImagingBot, to reflect its use of image manipulations (and because I later want to rewrite it into C++).
Posted by Jake at 2:46 AM